To Burn a Bridge? Or to Cross it Only When You Come to it? Lessons from Black-Scholes Options Pricing Model

When the Spanish explorer Cortez landed at Veracruz, the first thing he did was burn his ships. Then he told his men: “You can either fight, or you can die.” Burning his ships removed a third alternative: giving up and returning to Spain. [from Creative Whack Pack Card # 55]

In 1334, Hochosterwitz Castle was besieged by the Duchess of Tyrol. As time wore on, the defenders became desperate: their last food was an ox. The Duchess’ situation was also severe: her troops had become unruly, and she had urgent matters elsewhere. Then, the castle’s commander had an idea that must have seem utter folly to his men. He had the last ox slaughtered and thrown over the wall in front of the enemy. The Duchess interpreted this scornful message to mean that the defenders had so much food that they could waste it. At this, the discouraged Duchess quit her siege. [Creative Whack Pack Card # 59] 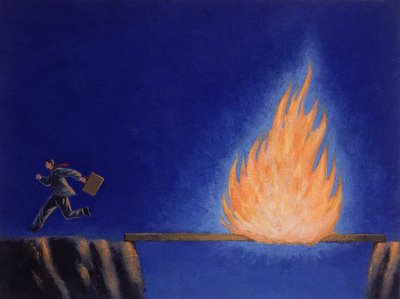 These examples show how the “burning your bridges” strategy involving deliberate elimination of one’s options is sensible under certain circumstances. In war, for example, when you need to invoke the powerful psychological influence of extreme commitment [Read chapter on Commitment and Consistency in Cialdini’s Influence] by your troops to achieve a desirable goal which appears, to most people, impossible, this strategy clearly makes sense. Great Generals like George Patton knew this. So do great business leaders.

Why does the burning your bridges strategy work?

When a man burns his bridges, there is no more turning back for him and that realization changes his attitude towards the only two choices now available to him– one which will lead to sure failure and disgrace, and another one which requires him to achieve something, which, at present, appears impossible to accomplish, but if accomplished, will lead to success and glory. The act of destroying some of his options drives the man to accomplish the impossible.

So, the burn-your-bridges tool is a good tool. Like any tool, however, its prone to be over-used by men who are afflicted by what Mr. Charlie Munger calls the man-with-the-hammer syndrome: “To a man with a hammer, everything looks like a nail”.

How does one avoid falling victim to the man-with-the-hammer syndrome in this case? Well, one way would be to invert the problem and ask the following question:

Are there situations where the burn-your-bridges tool will not work, but it’s opposite i.e. keeping-your-options-open tool, will? And once you think about the problem in this manner, the answer is obviously a “yes”.

To see how, let's go inside the guts of Black-Scholes Option Pricing Model.

Options - puts as well as calls - have value for all sorts of reasons. The elegant Black-Scholes Option Pricing Model, shows, that there are six factors that determine the value of options : (1) the stock price; (2) the exercise price; (3) risk-free rate of interest; (4) dividends; (5) time to maturity of the option; and (5) volatility.

For the purpose of this essay, two of these are important- time to maturity and volatility.

Time to Maturity: A key reason why options - calls as well as puts - have value is that there is time before which the option holder has to decide whether to exercise it or not. Options with longer lives are more valuable than options with shorter lives, other things remaining the same. This is true for both calls as well as puts.

What works in finance also works in much of life.

In rapidly changing situations (think high volatility), buying time before making a decision (think increasing time to maturity) will improve the quality of the decision, other things remaining unchanged. Dynamic situations have a high likelihood of the emergence of new, material, information. That is, stuff happens.

Therefore, sometimes it makes sense to keep your options open, to buy time, to delay decisions and wait for new information, before making decisions. In other words, you should cross a bridge only when you come to it.

Mr. Rubin, who is currently chairman of Citigroup, developed his philosophy of preserving optionality while doing risk arbitrage at Goldman Sachs. In risk arbitrage, one bets money on the happening or non-happening of a corporate event such a merger. By definition, such events are dynamic i.e. they display a large degree of volatility because the chances of new developments (e.g. the emergence of a competing bid, regulatory or financial glitches etc.) is significant. While practicing risk arbitrage, Mr. Rubin learnt that preserving optionality is very often a good idea. He successfully applied the same idea in his hugely successful career as the US Treasury Secretary under President Clinton. Clearly multi-disciplinary thinking helped him a lot.

One can learn much about Mr. Rubin’s thoughts on preserving optionality and his philosophy of decision making from his excellent book, “In an Uncertain World”.

In July 1998, the New York Times Magazine published an article on Mr. Rubin. Jacob Weisberg, who wrote the article, had talked to Lawrence Summers about Mr. Rubin. An excerpt:

Rubin is someone who loves to examine and reexamine his options -- a tendency the academically minded Summers refers to as “his preference for optionality.”

One thing Summers says he has learned from Rubin is the value of not always choosing among the available options. “Rubin ends half the meetings with - 'So we don't have to make a decision on this today, do we?' Summers says. New information will evolve.”

“What so many people have a tendency to do is to lock into a scenario,” Summers says. “What Rubin will say, at times to the frustration of others, is that some questions don't have answers - which is to say that just because a problem is terrible, we don't have to act. It may not be the right time.”

In November 2003, Carol Loomis wrote a wonderful article on Mr. Rubin for a Fortune magazine cover story. An excerpt:

Part of Rubin's approach to decisions at the Treasury was to put them off as long as possible. Some people might call that procrastination; Rubin called it getting that one last fact or well-judged opinion, from whoever at the table might offer it, that might make a decision the right one. Geithner says the young members of the Treasury staff would on occasion rush into Rubin's office, imploring him for a decision about something consequential. Rubin's first question would often be, “How much time do we have before we have to decide?” Summers tabs this Rubin's habit of “preserving his optionality.”

Another person who agrees with Mr. Rubin is Steven Sample, the author of the excellent book, “The Contrarian's Guide to Leadership”. In this book, which was once recommended by Mr. Munger, Sample states one of his contrarian rules of leadership:

“Never make a decision today that can be reasonably put off till tomorrow.”

Mr. Sample gives the example of Harry Truman that reminds me of Mr. Rubin.

“Whenever a staff member would come to him with a problem or opportunity requiring a presidential decision, the first thing Truman would ask was, “How much time do I have?" Was it essential that he make the decision in thirty seconds, in an hour, in a day, sometime next week, in a month, within a year.”

Of course, Benjamin Graham, the father of value investing also knew about the idea of preserving optionality. In his book, Security Analysis, Mr. Graham discussed the wisdom of the principle:

Suppose that a bond issued by a sound company, having a face value of $100 is convertible into 2 shares of the company at a fixed price of $50 per share. The option to convert is available to the bondholder for the next 3 years, and the stock price of the underlying company is $60 per share.

Suppose this bond is selling in the market for $150. Should the bondholder convert?

Mr. Graham suggested that he should not convert. Why so? Because by converting his bond which can be sold in the market for $150, the bond holder will get two shares having an aggregate market value of $120, a loss of $30.

So, the bond holder should not convert because doing so will result in the loss of the time value embedded in the option to convert. If the bondholder is bullish on the company, he should continue holding the convertible and if he is bearish on the company he should sell the convertible, but he must not convert it because doing so will destroy the time value of the option.

Conclusion: So, after much deliberation over the creative whack pack, the option pricing model, the wisdom of Robert Rubin, Steven Sample, Benjamin Graham, and others, what's my conclusion?

The trick, of course, is to know, when to do what.

If I look back at my own life and identify key decisions I took that explain my current situation, I find that most of those decisions required burning bridges. On the other hand, in my day-to-day affairs including investment-related affairs, I find that preserving optionality has helped me in making better decisions.
Posted by Sanjay Bakshi at Saturday, December 03, 2005